Think cellphones are being used responsibly by teenagers during school? Think again…. 🙄

This is the reason cell phones are such a distraction during class… My students conducted research on their own cell phone use during class. I had them turn on their phone sounds and leave their phones on their desks. Whenever they got a notification, they got up and put a tally mark under the appropriate category. I continued class as normal (after this many years, I can ignore anything 😂). Students got SO frustrated!! They also didn’t realise they were being interrupted as often as they were (Sometimes even by adults— parents & counselors and teachers via Remind. We didn’t even check notifications from Google Classroom!). It was insane!

So How Did We Use This Data?

We used this data to foster a very real conversation about cellphone use. It was eye-opening for students to see the actual numbers for the instances they are interrupted by their phone during the day.  They told me they felt like they were good at “multitasking” …. until everyone’s phone sounds were audible! Then, they said it was overwhelming.  I compared this to what their brain is feeling like while they’re trying to make sense of information in class.  It can only handle so much… then, it just wants to shut down. It was a good lesson for my students.

Was the Data Similar for All the Classes?

I teach 2 sections of Forensic Science (all Seniors) and 2 sections of Human Anatomy & Physiology (Juniors & Seniors mixed).  Neither class is classified as “Honors”, although most of my Forensic Science students and about 2/3 of my Anatomy students have taken Honors classes throughout their time at my school.  My 4th Block Anatomy class has the fewest students, as well as the least number of students who have taken Honors classes.  Here are the results from my classes: 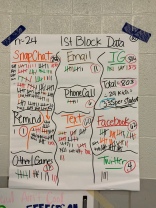 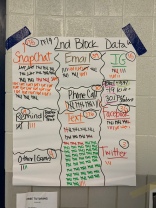 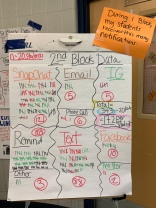 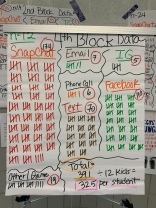 We analyzed the data as a class.  They were astounded that they were interrupted an average of around 30 times PER student in a 90 minute block! It was also interesting to me that different classes utilized different social media outlets.  The notifications via Remind were ALL from counselors and teachers.  It definitely made me rethink when I communicate with my students.  We forgot to track our notifications via Google Classroom, although I think it would be interesting to see if this is an issue (I know I post assignments during my conference block.  Now, I schedule them or post them right before class).

How this Data Impacted My Classes

The reason I had my students participate in this data collection was because I wanted them to realize they are constantly being interrupted in class and it was affecting their ability to pay attention. Rather than just say “NO CELLPHONES IN CLASS AT ALL!” I wanted to help them learn a life lesson about negotiation and responsibility.  In my opinion, people have become increasingly addicted to their phones (I admit, sometimes I am too but I can control myself lol) and there is a time and place for everything.  So,  I wanted my students to participate in negotiating a “fair use” policy for our classroom.  It’s a “non-negotiable” that phones are put away during instruction. However, I wanted them to have input in what would be “fair” in terms of an opportunity to check their notifications (since they apparently get so many). I was SO proud of them!  They discussed the issue like the young adults they are. They listened to each other.  Then, they came up with a plan (that actually met with my approval yay!).  We decided that  access to their phones would be allowed only until tardy bell, 5 min before class ends, & when we have a class restroom break in the middle of class. Students also have to wait until I tell them it’s ok at these 3 times. Any “unauthorised” phone use lands their phone on my desk (in phone “prison” which is a plastic bin lol) for 3 class meetings. After their phone spends 3 class meetings in my plastic bin, it is on “parole”.  A second offense will get an office write up. Here’s our class policy: 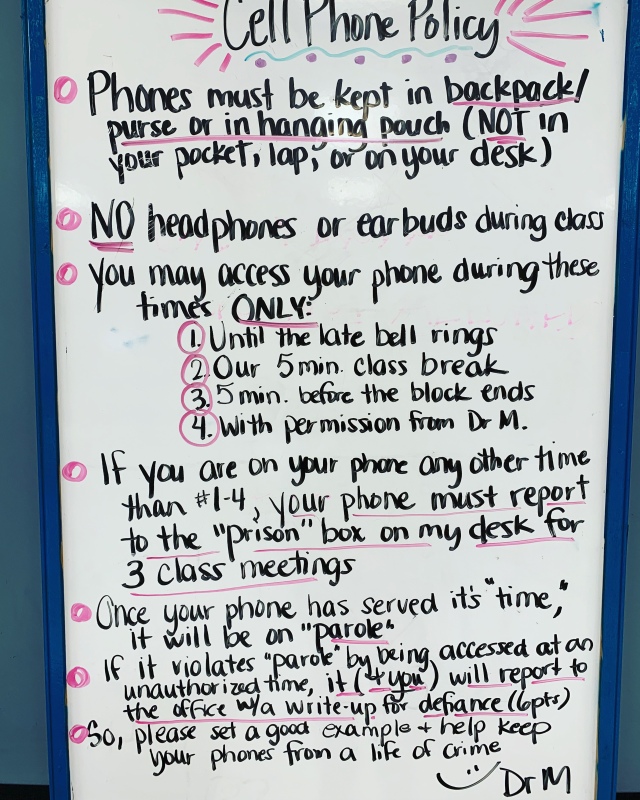 I’m very proud to say that I have only had 6 students out of 4 classes whose phone has landed in my plastic bin (and no “parole violaters”). I think because my students had real input into the guidelines, they feel more compelled to follow our class rules.  I will definitely have students participate in this “life lesson” again next year.